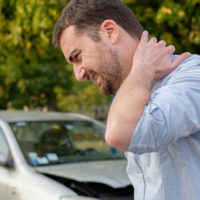 Two passenger vehicles and a Metro Transit Bus all collided near the intersection of Penn and Eighth Street.

Investigating officers have not yet assigned fault. But according to witnesses, a passenger vehicle proceeded through the intersection at an excessively high speed. The driver of the second vehicle was rushed to a nearby hospital with serious injuries. A number of bus passengers were also hurt, but it was unclear how many or how severely. The driver of the first vehicle apparently fled the scene on foot and is still at large.

None of the names were released.

Sudden violent motion, as opposed to trauma, causes whiplash. So, the injury usually does not show up on common diagnostic tests, like X-ray machines. As a result, doctors often dismiss the initial symptoms, such as neck stiffness, as post-accident soreness.

Whiplash also does not follow the standard illness pattern. There is no pill or injection which can make it go away. Instead, the only treatment is extensive physical therapy. This therapy must come from a professional who has dealt with crash-related neck injuries in Minnesota.

Because of these factors, many whiplash victims in Minneapolis do not immediately get the help they need. The doctor does not see the illness straightaway, and the doctor is also unsure how to treat it.

An attorney does a lot of good in this particular context. A Minneapolis car accident lawyer can connect victims with a Minneapolis car accident doctor. Since the physician is looking for latent injuries like whiplash, they are commonly diagnosed. Then, as physical therapy progresses, the therapist knows how to handle the injury. The therapist does not push too hard and does not cut the patient loose too early.

In some cases, liability is even easier to establish. If the tortfeasor violated a safety law, such as running a stop sign, the negligence per se shortcut may apply. This doctrine is applicable if:

Even if the tortfeasor did not remain at the scene, it still may be possible to establish liability. Victim/plaintiffs need only prove liability by a preponderance of the evidence (more likely than not). Since it is more likely than not that the car’s owner was also its driver, the victim/plaintiff need only produce vehicle wreckage, in many cases.

Reach Out to a Savvy Attorney

Head and neck-related crash injuries are often difficult to diagnose and treat. For a free consultation with an experienced personal injury lawyer in Minnesota, contact the Gunther Law Office. Our main office is conveniently located in downtown Minneapolis.